(shanghaiscrap.com) The personal and professional interests of the foreign media in China have never had much in common with the average Chinese people with whom they cover. Sometimes, this is a good and necessary thing: if the foreign media won’t cover Chinese dissidents, who will? But often, this produces absurd results that distort – for readers and viewers outside of China – what matters to China.

Take, for example, the near obsession that China’s foreign correspondents have with Jia Zhangke, a very good Chinese filmmaker who makes “serious,” socially conscious films that have almost no audience in China, but which win awards abroad. This year, during the Expo, the New Yorker (to choose just one English language publication) devoted thousands of words to Mr. Jia. Fair enough, I suppose, except for the fact that – at the same time Jia Zhangke was appealing to a decidedly small audience of hyper-educated New Yorker writers, readers, and editors, the turnstiles at Expo 2010 – the Shanghai World’s Fair – were rotating at a rate that eclipsed Jia Zhangke’s entire Chinese audience by noon, every day, May to October. If New Yorker readers wanted to know something about why people were rushing through those turnstiles, they’d have to look elsewhere because, aside from a few blog posts, the magazine published nothing on Expo 2010 – the biggest and most expensive event that ever took place in China (and, some argue, anywhere). Of course, the New Yorker, and its terrific China correspondent weren’t along in this choice of coverage – they were joined in the decision by most of the China-based foreign media (and their overseas editors). What a pity.

If you believe the official figures, Expo 2010 was visited by more than 70 million people, many millions of whom waited in long ticket lines, outside of the gates, in the heat of July and August (to be sure, quite a few visitors also received their tickets for free), for the chance to wait in long lines within the Expo grounds. The obvious question is: what was the appeal? The less obvious question is: why didn’t the foreign media probe this question? More precisely, rather than ignore the phenomenon, why didn’t anyone pause to ask what was it about contemporary China that drove so many people to do something that most foreigners – especially foreign reporters who are lock-step disdainful of crowds and mass events enjoyed by Chinese – had no interest in doing?

I’ve been dismayed by the number of reporters and expatriates who’ve ascribed the huge attendance figures to lemming-like Chinese behavior, and free tickets (see recent posts and comments on my blog, for starters). Leaving, for another time, the elite mindset necessary for a foreigner (much less, a foreign reporter) to dismiss the interests of the locals as being mechanical and totally manipulated by the CCP, let’s just assume that rural Chinese aren’t much different than hyper-educated foreign reporters. And what I mean by that, as a foreign reporter who attended the Expo more than fifty times, is this: the folks who attended Expo, either in groups or on their own, were many things (aggressive, enthusiastic, patient), but never once did I sense that they were stupid, or so lacking in other options that they’d willingly spend hours in line, in the heat of August, for something that didn’t interest them – just because they received free tickets. [Below, Chinese visitors to the sublime Iceland pavilion.] 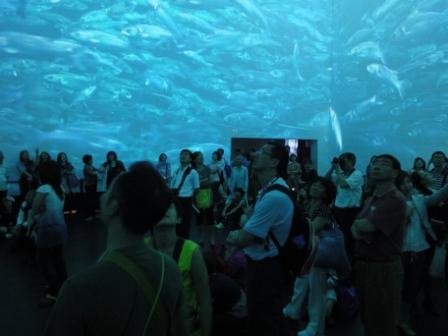 Or let’s put it this way: it’s very easy, I think, to stand atop the Expo Boulevard, look down at the six-hour line outside, say, the Saudi Arabian pavilion, and imagine that you’re look at a bunch of lemmings with free tickets. But is that really the best, much less only, explanation? Or is there something else going on down there? Could it be, just possibly, that all of those people are curious to know something about a country capable of spending (reportedly) well over $100 million on a pavilion, and lacking the opportunity to travel there themselves (unlike most Expo critics in the foreign media), are taking the only route available to them? Six hours, in that sense, may not be such a long time. Alternatively, rather than ascribe deep aspirational meaning to those lines, (or lemming-like behavior), it might be better to take a simpler approach: tens of millions of Chinese went to the Expo to enjoy themselves. They did, told their friends and family, and – as the figures show – attendance built.[ Below, the line for the Saudi pavilion at 8:00 PM, the second to last night of the six-month Expo.] 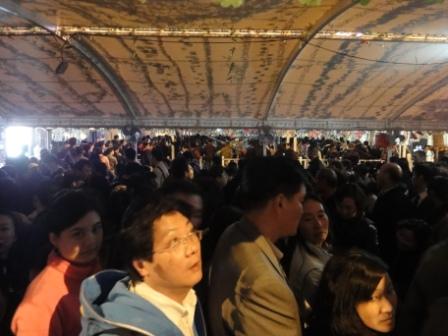 So why do I think Expo 2010 mattered? Lots of reasons, but for now I’ll focus on a favorite.

Non-Asian foreigners who have lived or traveled in China, outside of the big cities, all share a common experience: at some point, someone is going to want to have their picture taken with you. And, along the way, they’ll likely tell you that you’re the first foreigner that they’ve ever met (even though they’ve been watching foreign faces on television screens for decades). Now, there’s two ways one can take this experience: you can roll your eyes and think ‘what a bunch of hicks,’ or you can accept it graciously and hope that you made a decent impression as a First Foreigner. At Expo, this experience was had by non-Asian staff and volunteers millions of times. According to some of the young, fresh-faced American college students who worked the lines outside of the USA pavilion, they often posed for over 100 photos per daily shift, sometimes more. It wasn’t just the Caucasians, either: a staff member at an Arab pavilion who would normally dress in his country’s traditional garb, told me that he began dressing in jeans and T-shirts because the number of photo requests made it impossible for him to move through the grounds.

James Fallows, my friend and long-time correspondent for the Atlantic, picked up on why this matters in a way that correspondents based here never did. Writing, after his first few hours at the Expo, Fallows noted:

Shanghai Expo of 2010, whose most devoted attendees appear to be small-town and rural Chinese folk, serving the same role the St. Louis World’s Fair did for Midwestern Americans a century ago — giving them a glimpse of what the wide world might look like, since they are not likely ever to see it themselves. Strangely uplifting.

‘Uplifiting’ is an interesting choice of words, and one that I like quite a bit, both because I identify with it, and because most of the foreign media who came into contact with the Expo had the opposite reaction. It’s all a matter of perspective, I suppose, but I can’t help but conclude that – in the end – if Expo 2010 failed to teach China’s foreign correspondents anything about China, it certainly should have taught the Chinese something very important about the foreign correspondents – and very little of it to their credit.

Addendum: Just got off the phone with a journalist friend who challenged me to give him three stories that he missed at Expo. Fair enough.

But first – as a catty fellow journalist: if a journalist has a multi-billion dollar event in his back yard, one attended by 200+ countries, tens of thousands of foreign staff, visited by hundreds of foreign leaders and bureaucrats, not to mention tens of millions of Chinese, and can’t manage to find a decent story, say, every week or so, then that journalist’s reporting license should be revoked. I mean, seriously.

Second, I must concede that, from a reporter’s perspective, the Expo was a better feature than it was a news story. But that’s what most of the foreign correspondents in China do: they look for small events and blow them up (sometimes absurdly) into bigger events that (supposedly) explain some greater trend in China. For example, in recent weeks, while Expo was hosting 1 million visitors per day, the New York Times decided to run a story on dog ownership in China, comically titled (am I the only one who laughed at this?) “Once banned, dogs reflect China’s rise”– a story on friggin’ Chinese pet ownership that’s been done dozens of times over the years (including, I concede, by me).

This reporter, if he had time to write about dogs as a symbol of China’s rise, surely also had the time to report on these Expo-related incidents and trends, and blown them into “China’s rise” or other trend stories: the fight that broke out (early in the Expo) between Palestinian and Israeli pavilion staff (launch point for nice weekend-y feature on how int’l tensions are reflected at Expo); Expo security’s detention of Omani pavilion staff for wearing sports jerseys with numbers on them sensitive to Chinese bureaucrats (launch point for discussion of tensions between China and Arab countries on Muslim minorities); the numerous corruption episodes involving various national pavilions (don’t get me started); national pavilion concerns (and actions taken) in regard to economic and other types of espionage occurring at Expo (multi-day feature on economic espionage in Asia); the poor relations between many Chinese contractors and the national pavilions (Hello Forbes! Hello Fortune!); the numerous deals sprung, negotiated, and closed in VIP suites, etc etc (where was the WSJ’s VIP-suite correspodent). I could go on all day.

And finally, how about a feature that explores why Chinese people continued coming to the event despite the crowds, the heat, and the bad press? Was there something there – something that the average foreign correspondent didn’t understand or share – that motivated Chinese visitors? Expo 2010 was the biggest, baddest and widest walking China/international relations metaphor that anyone has ever seen. And alas, it’s going to be up to the feature writers, the historians, and novelists to tell us all about it, and why it mattered. The foreign correspondents, and their editors back home, totally missed it.