(shanghaiscrap.com) At the moment, there ’s almost no reason to believe that the United State will occupy a stand-alone pavilion when Expo 2010 opens in Shanghai on May 1, 2010. And though this doesn’t seem to be a matter of much concern in the United States, it is a matter of intense concern in Shanghai, and in Beijing, with powerful voices beginning to suggest that the US will suffer real and lasting commercial consequences in China if it doesn’t use the next 348 days to rescue its floundering pavilion effort

Over the last several weeks, as I’ve published various stories and blog posts on this subject, one question continues to come up: namely, why wouldn’t US companies with Chinese operations rush to become sponsors of a project likely to be visited by upwards of 70 million Chinese citizens during Expo 2010’s six-month run?

In the interest of answering that important question, and explaining why the authorized US pavilion team has raised only $2.8 million of a $61 million budget, I’ve prepared this short primer on the various issues and reasons inhibiting - if not outright preventing - US companies from contributing money to what would appear to be the premier international PR event of 2010. In assembling this post, I’ve drawn upon conversations and emails with individuals connected with US corporations operating in China, many of whom have been directly solicited for pavilion contributions, or attended pavilion-related events. Most of these individuals have spoken or written to me off-record, out of concern that negative comments about the US pavilion effort might invite negative consequences, if not outright retaliation, from various quarters. 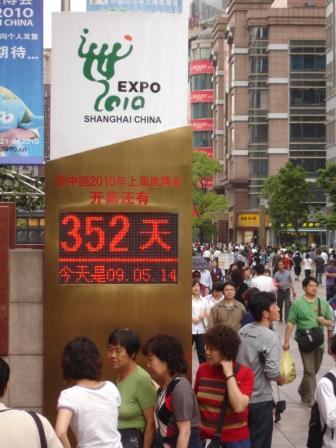 Broadly speaking, there are two issues. The first concerns US government restrictions on funding international expo pavilions; the second is broadly related to issues that have arisen with the US State Department, and its chosen entity to fund-raise, design, build, and operate a US pavilion. The first I’ll deal with briefly; the second will require more space.

It’s been widely reported that the US Congress restricted the State Department’s ability to fund pavilion at international expositions in 1991 (subsequent legislation, later in the decade, further tightened these restrictions) As it happens, people with better legal skills than me have suggested - both in private correspondence and publicly - that the prohibitions may not be absolute (or possibly misinterpreted). But regardless of the actual legal status, the simple, on-the-ground fact is that the State Department has operated under the assumption that the prohibition is real. And, as a result, in March 2008 it issued a Letter of Intent (LOI) authorizing two former Warner Bros. executives, Nick Winslow and Ellen Eliasoph, to form a non-profit entity to “assume full responsibility for the project,” including to “design, instruct, install and manage” a US pavilion at Expo 2010, and “to raise all funding required for the project from the private sector.” Theoretically, had Congress not meddled with pavilion funding mechanism, the US might have already broken ground on its Expo 2010 pavilion. But Congress did meddle, and so we’re left with a convoluted process.

To be clear: the Letter of Intent is not authorization to break ground and build a pavilion. That privilege will only come after the State Department signs a Memorandum of Agreement (MOA) authorizing such actions, and - according to the Letter of Intent - State will only do that only after Shanghai Expo 2010, Inc has demonstrated that “adequate funding for all aspects of development, construction, oversight and management of the U.S. Pavilion and its programs are in place.” So far, that isn’t even close to happening.

The remainder of this extended post will explain why.

Shortly after receiving the LOI, the group ran into two very serious issues, one foreseeable, and one not.

A. The Olympics. Shanghai Expo 2010, Inc., began its formal fund-raising efforts less than six months before the Beijing 2008 Olympics. This was ill-timed. Corporate sponsors who might otherwise express an early interest in affixing their name to a US pavilion for Expo 2010 were heavily distracted by the much bigger opportunity - and expenditure - that the Olympics presented. As a result, US pavilion fund-raising was delayed until the fall of 2008.

B. The Global Financial Crisis. Corporate sponsorships already stretched thin by the Olympics, suddenly evaporated. At that point, in October 2008, Shanghai Expo 2010 Inc announced it was withdrawing from the effort and ceasing further development.

A. Foreign donors. At Expo 2005, at Aichi, Japan, Toyota had been the primary sponsor of the US pavilion, much to the embarrassment of the State Department and anybody who might have been paying attention. Nobody, least of all the State Department, was willing to tolerate a Chinese-built US pavilion in Shanghai, especially in the wake of massive US public borrowing from China in the wake of the Global Economic Crisis. Politically, the symbolism was unacceptable.

B. The State Department screens all potential donors in hope of preventing sponsorships by companies that - for example - have violated the Foreign Corrupt Practices Act, or might otherwise prove embarrassing to the United States. As a result, Shanghai Expo 2010 has been unable to tap the potentially lucrative group of US companies in search of an image upgrade.

As of this writing, the Memorandum of Agreement (again ,the MOA), indicating that the Department of State considers the Shanghai Expo 2010 Inc plan to be viable, has not been signed. Nonetheless, only so much blame can be pinned on the State Department. To be sure, they’ve played a significant role in causing the current fiasco, but the authorized group - Shanghai Expo 2010, Inc - sought out the State Department’s authorization knowing full well of the restrictions that would be imposed against it. Thus, it’s necessary - if a bit unpleasant - to detail the various factors that have prevented this authorized group from successfully raising money from US corporations in China, and elsewhere.

A. Cost. Shanghai Expo 2010’s $61 million pavilion budget - down from an earlier $84 million budget - is inordinately expensive, and surely the most expensive national pavilion after the elaborate Chinese design. “For that kind of money [$61 million],” an experienced American businessman in Shanghai told me. “You could build a thirty-story residential tower on that site and still have money left over. But these people want that money for a two story pavilion.” In comparison, Germany’s elaborate pavilion design is projected to cost US$40.8 million; Norway’s elegant structure, a comparatively minor US$22 million. And even those might be overpriced. At the Beijing 2008 Olympics, major commercial pavilions were built for around $1000 per square meter - that is, less than US$5 million. So far, Shanghai Expo 2010, Inc., has failed to provide a detailed public accounting of how it plans to spend its proposed US$61 million, leading to wild and unsubstantiated speculation among experienced China hands in Shanghai. [UPDATE: I\'m told that there are, in fact, a couple of pavilions more expensive than the proposed US design, including Japan\'s. In either case, the US\'s remains one of the most expensive, under-funded and - key - it could be done well for much, much less.]

B. Deadlines. Repeatedly, Shanghai Expo 2010, Inc., has set public and private deadlines for fund-raising and construction, failed to meet them, and then either ignored or downplayed them. These include a January 2009 date to start construction (in its original plan submitted to the State Department), and a March 31 date to complete fund-raising (on its Chamber of Commerce-sponsored website as recently as May2) for a May 1 groundbreaking. Potential and actual corporate sponsors have been unnerved by this disregard for dates, and their nervousness has only been stoked by well-founded suspicions that the State Department is ignoring, if not actively enabling the procrastination rather than supervising its chosen pavilion team (or seeking out a more reliable one). There is ample basis for these suspicions: For example, on April 23, 2009,a US Consular official in Shanghai actively involved in the pavilion effort emailed an individual concerned with yet another missed deadline, with this observation: “On the date issue, there is too much fuss over a single date. In fact, April 15 was one of several dates mentioned over the past year … [T]his is par for the course when both the project scale and the challenges are great … [N]o one’s clock has run out because a target in April was missed. So the U.S. has not yet confirmed participation.” This official may have a point, but what he, the State Department, and Shanghai Expo 2010 fail to understand is that this sort of attitude freaks out potential US sponsors. After all, what company wants to give money to an enterprise that can’t meet self-imposed deadlines?

D. Credibility. Inexplicable costs, missed deadlines, and a lack of transparency should be enough to damage the credibility of any organization in the eyes of the already wary expatriate business community in Shanghai. And they have. But, unfortunately, that’s only the beginning. As documented at Shanghai Scrap and elsewhere, over the last eight weeks the members of Shanghai Expo 2010, Inc have been publicly corrected by government officials and changed positions on whether or not they are interested in foreign funding (quietly, the State Department has changed its rules, and now allows them to accept foreign funding). In my own interviews with Shanghai Expo 2010, Inc, the principals have contradicted each other, or made statements that are unverifiable. And these sorts of encounters are not reserved for the press alone - they’ve happened countless times over the last 18 months, at fund-raising events and in private meetings. As a result, several potential donors have decided that - based upon the individuals managing the US pavilion - they won’t contribute. And, according to somebody close to the situation, at least one current confirmed donor to the pavilion effort is having second thoughts about the commitment. Reportedly, the official effort is close to losing credibility with Expo organizers, too.

So what’s to be done? Barring the sudden appearance of a miracle donor willing to fund Shanghai Expo 2010, Inc without strings, I’m not sure. Several individuals inside and outside of Shanghai have proposed viable, lower-cost alternatives to the current plan (ranging in price from $20 million to $30 million), but without explicit State Department authorization, or an agreement from Shanghai Expo 2010 to collaborate, those plans aren’t going anywhere. In my opinion, the US effort could use some new faces and management to reassure increasingly wary and frustrated potential and actual donors (and those upon whom donors rely for advice). That doesn’t necessarily mean jettisoning the current authorized group, but it almost certainly means supplementing - if not supplanting them - with credible individuals committed to deadlines, transparency, and competent management.